The project by Jan Pfeiffer (*1984) launches the cycle of interventions to the Baroque spaces of the Colloredo-Mansfeld Palace. As a visual artist, Pfeiffer employs in his oeuvre the analytical approach of an architect. He is interested in pure geometric forms – in signs and condensed segments of stories, which he later develops in his videos. The event intervention_1 is interlinked by three works.

Each of them originates from parallel worlds: in a “real” three-dimensional stage-designed space, where the main role is played by metal objects, and in a virtual space of the video recording, where we can see the works originate, move and take shape. Abstract forms, which represent the point of departure in Pfeifferʼs thinking, are either formed by human power – i.e., will – or by simple physical laws. 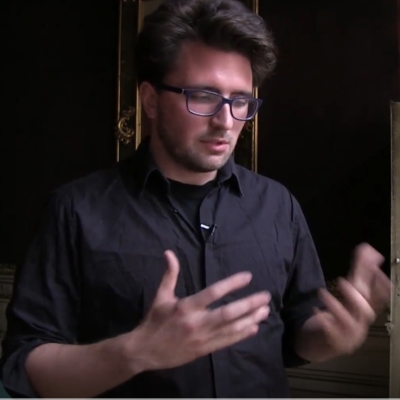