František Bílek built his studio villa in the Prague Hradčany Disctrict 1910 and 1911 according to his own plans and design. Bílek was mainly a sculptor and graphic artist, but his religious approach to art gradually steered him towards the need to create complex environments in which his works would find multi-layered function and roles, thus fulfilling Bílekʼs vision of spiritualizing human life. His architecture was mainly idea-motivated.

In Bílek’s view, the Prague villa should express “life as a field full of ripe ears, nurturing our brothers every day. Many ears are bundled into sheaves – columns. Some columns remain unfinished for they do not support anything”. The segmented ground plan can be read as the trace of a scythe harvesting grain, while the conspicuous shape of the columns should remind one of ancient Egyptian temple architecture. The ecru brick and roughly processed stone draw the architecture nearer to Nature and human work. The irregularly articulated interior is dominated by the high studio as a natural working and spiritual centre of the building. Villa Bílek has been in the possession of Prague City Gallery since 1963. The permanent exhibition, which was opened here recently, presents Bílekʼs works of art from the supreme stage of his artistic development along with the original interior furnishing. 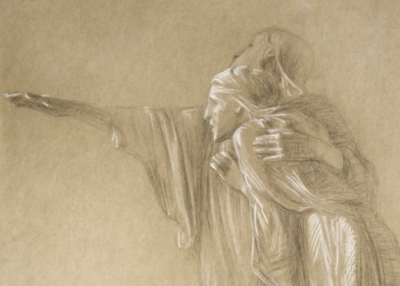