The exhibition František Skála and Other Works is largely devoted to the artist’s lesser-known book illustrations. In his work to date, Skála has created many illustrations for works ranging from children’s books, to scientific publications, to photographic comic strips and artist’s books, using various art techniques. The form of the exhibition also includes a number of other aspects related to Skála’s sculptures, paintings and performances. Following in this vein, the show is an extraordinary retrospective of Skála’s illustrations, one that also reveals the overlapping areas and diversity of his artistic work.

For the first time ever, František Skála is presenting the lesser-known book illustrations he has created since the early 1980s at a retrospective exhibition entitled And Other Works. After his very successful exhibitions at Galerie Rudolfinum and the Wallenstein Riding School of the National Gallery, we have an opportunity to see another aspect of Skála’s poetic, mysterious work, deeply ingrained in the natural world and always unpretentiously humorous. The form of the exhibition also includes a number of other aspects related to Skála’s sculptures and paintings. Following in this vein, the show reveals the overlapping areas and diversity of his artistic work.

As a child, the artist was significantly influenced by the environment around him, whether by various antiques (in his father’s collection) or by folk music (his mother was a choreographer and the founder of the ensemble Chorea Bohemica). This certainly had an effect on his perception of, and relationship to, various materials and elements of style associated with folk art. All of this indirectly appears in his illustrations, which have an outward reach – whether to his existential experiences related to his stays in nature “in the wild” by the sea, the walking trip he took to Venice in 1993, or his other inspiring travels around the world. Special mention should also be made about Skála’s diaries and his private editions of small books.

The exhibition has been conceived as a creative journey. It begins with the paintings made by Skála under his father’s guidance when he was on the threshold between childhood and adulthood, goes through Skála’s search for himself during his studies and mature years, and ends with insight into his most recent work.

The exhibition does not just feature the 20 books, most of them for children, that have been illustrated by one of the best-known Czech artists of recent decades. It also provides insight into how closely Skála’s profession as an illustrator is connected with his non-commissioned paintings, prints and sculptures, how it winds through his oeuvre like a submerged river, reflecting his various creative periods and interests.

His work on individual books, especially the artists’ books, is always inextricably – and to a certain extent, inevitably – connected with the time of their inception. This applies to Forgotten Crafts, an encyclopedia that Skála illustrated after completing his studies at the Academy of Arts, Architecture and Design, and to Carl Sandburg’s Rootabaga Stories, which came at the time following his engagement in an almost underground rock band and the birth of his two children. The Royal Fairy Tales by the poet Karel Šiktanc are illustrated by Skála with charcoal drawings of forests from the late 1980s, when Skála encountered Alén Diviš’s art and Bohuslav Reynek’s poetry and opted for the simple form of charcoal wash drawings. Another important project was The Great Travels of Hair and Chin. This legendary comic book by Skála himself came into being during the emergence of Postmodernism and the establishment of the art group Tvrdohlaví [The Stubborn Ones]. This comic book is the most closely interconnected with Skála’s fine art, which he kept separate from his illustrations at the time. His sculptures such as Big Woodpecker (1987, East Bohemian Gallery in Pardubice) or Butterfly on a Flower (1985) came into being as autonomous objects presented at exhibitions, at the same time inspiring the inception of the beings who appeared in The Great Travels of Hair and Chin. On the other hand, the ghost called Lesojan [Forest John] had been seen for the first time by Hair and Chin in the Blue Forest and subsequently materialized in the sculpture Lesojan (1988). During the mid-1990s, Skála spent two years adapting the comic book for a full-length animated film (first in Zlín and then later at the Barrandov film studios), but unfortunately it was not realized for financial reasons. The story was finally successfully dramatized at the Minor Theater in 2007. A similar fate befell The True Story of Cílek [Cecil] and Lída. Skála got the idea to create a photographic series in a real forest environment in 1989 upon the completion of his comic strip The Great Travels of Hair and Chin, the last page of which features several photos taken by the penguin Michal. This physically demanding, time-consuming labor, similar to shooting an animated or feature film, involving the preparation of puppets and the environment and taking photographs over the course of the seasons, expanded from two months to two years and resulted in the division of the series into two books. The small, introductory one entitled How Cecil Found Lída (Meander, 2006) was followed by the big one, The True Story of Cílek [Cecil] and Lída [Cecil’s Quest in the English version] (Arbor vitae, 2007). Just as in The Great Travels of Hair and Chin, one of the characters is Skála’s eight-meter-long steel sculpture called Spy, originally created for the European Sculpture Quadrennial in Riga, Latvia. In the story, this character appears as Lefant Troben, a creature living in the Desolate Dense Forest. This comic book became the inspiration for Jan Svěrák’s film Kooky Returns [Kooky in the English version]. When illustrating The Brothers Lionheart by Astrid Lindgren, Skála utilized his experience with the original technique of “scurography,” suitable for macabre or nocturnal scenes, which had been developed in the B. K. S. group (an acronym for “The End of the World is Coming”). The technique was quite appropriate for illustrations for this children’s book, the story of which takes place after the death of the main protagonists. In scurography, a negative image is drawn in pencil on tracing paper and subsequently developed like a photograph. The complexity of this procedure gives the resulting image its special atmosphere. Similar techniques include thermal drawings, made by bringing heat-sensitive fax paper into contact with a hot metal plate, or pencil drawings based on images spontaneously created by smoke on the paper walls of “wishing lanterns” that have been released into the air and then descended. Similar stories and chronologies can be found in each of the books illustrated by Skála. The illustrations reflect the artist’s view of the world, his carefully thought-out way of grasping a topic and the techniques to use, and his overall approach to creative work – being responsible, but at the same time having free rein. That is yet another reason why the exhibition And Other Works is so extraordinary.

František Skála and Other Works

In cooperation with the Museum of Czech Literature

Momo with a Flower

Baba Yaga in the Mortar 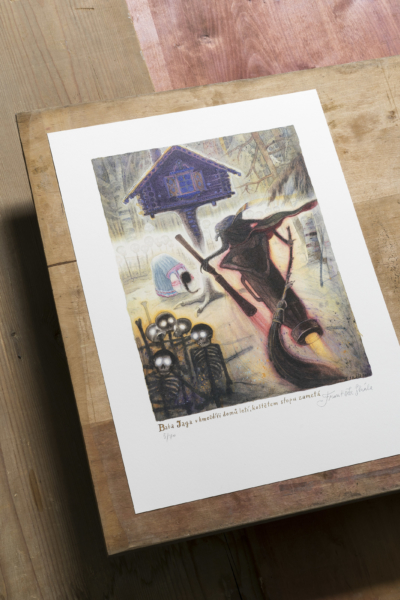 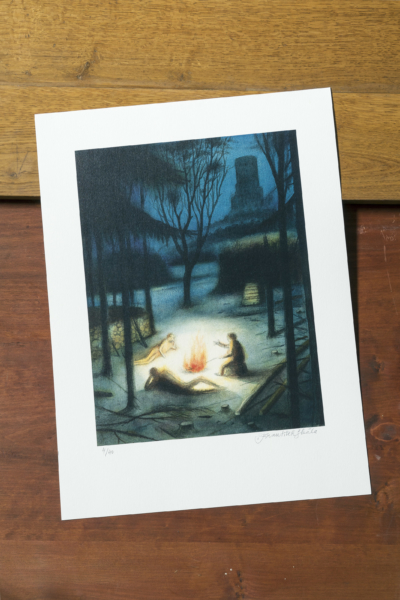