Five years after her last solo exhibition, Erika Bornová, a leading representative of the 1980s generation, presents new works. At the exhibition at the Colloredo-Mansfeld Palace, which is named after a verse from Rainer Maria Rilke’s The Book of Hours, she builds on her previous works on the border between sculpture and painting, dedicated to important historical figures, their passions, dramas, obsessions and visions. But the centrepiece of the exhibition is her work on paper: self-portraits painted with obsessive compulsion during the artist’s temporary and partial loss of sight, and fanciful, large-scale “portraits” of underwater plants and animals that show the bizarre beauty of a world invisible to the human eye.

Erika Bornová is a storyteller of powerful, ambiguous stories. She reflects on the banality of life with grotesque exaggeration, tries to unriddle the complex entanglement of the human imagination and dreams with her typical passion, and gravely examines the complicated relationship of a human to the world, to others, to themselves, and to nature.

Often hidden beneath the surface of the seemingly ordinary motifs in Erika Bornová’s work are disturbing messages – frustrations, insecurities, anxieties, bitter-sweet obsessions, madness – which revive forgotten experiences and repressed feelings and attitudes. From the beginning, an important leitmotif of the artist‘s work has been a return to the past, whether in her personal or in a collective history. Initially, journeys back in time were materialized through mythological themes, but in the last twenty years, they have increasingly appeared through myth-ridden stories of important, but also contradictory and ambivalent personalities. Through their destinies, Bornová shows how subtle the line is between “normality” and madness, between genius and infatuation, as well as between devoted love and destructive obsession, and that insanity and misguidedness are closer to human existence than a rationalized modern society would be willing to admit. The title of the exhibition, Madness is the Guardian of the Night, refers to a line from the poetic cycle The Book of Hours by Rainer Maria Rilke, an aesthete, unbalanced loner, neurotic, seducer and exalted poet. Rilke, however, is not only present in the exhibition as one of the characters with whom Erika Bornová (as an avid reader) plays out an imaginary performance about love relationships that are full of passion, traumas, victims and scheming (Rilke and His Women, 2018–2019; Alma and Her Men, 2018–2019) but also as an invisible spiritual guide through an extensive series of self-portraits and fanciful, large-scale “likenesses” of submarine plants and animals.

In her Self-Portraits series (2018), over the course of several months, Erika Bornová relentlessly and resolutely captured the escaping form of her own face. Although the identical paper format and monothematic nature risked becoming routine, in more than 60 acrylic self-portraits, executed with spontaneous painterly gestures, the artist shows the instability of human identity as well as the imperfect, blurred, “groping” vision that disrupts the hegemony of sight in achieving sensory knowledge. The features of her face dissolve in patches of colour, as if emerging from a dream, a delirious state of mind delirious state of mind, or memories clouded by amnesia; her vision is blurred, her eyes look like wounds and sinkholes leading to nothingness; they are rather windows to the soul than organs of sensory reception. Yet, with the gradual recovery and restoration of her sight, Bornová turned away from introspective self-portraits and began to reveal the remarkable, bizarrely beautiful and partly disturbing (for humans also dangerous) life in the depths of the ocean. In her highly imaginative large-scale drawings, the longest of which measures seven metres, she was freely inspired by the plants and the bizarre, sometimes repulsively slimy, but distinctly ornamental bodies of aquatic invertebrates hidden from the human eye in the depths of the seas and oceans, or visible only under a microscope. The strange shapes and colours of the hydrogamous flora, siphonophorae, cephalopods, cnidaria, anthozoa, sea bivalves, gastropods and snails, many of which have been discovered only recently and have yet to be given their fantastic names, combine to create a visually op lent and surreal “natural history”. Although Erika Bornová makes no secret of her fascination with the extraordinary natural ornamentation and miraculous abilities of certain aquatic creatures (for example, the sea slug which, through self-regeneration, can separate its head from its body and grow a new body on top of it), she is concerned with more than the form and certainly not with naturalistic illustration. The cycles Plants (2019–2020) and Water Creatures (2021) are – in part environmental – a response to humanity‘s increasingly artificial, plastic, virtual and rationalised existence. As the artist herself puts it, it is “an escape from concrete and viruses into nature and a world that is elusive to humans”.

Erika Bornová (b. 1964) studied painting at the Academy of Fine Arts in Prague (1983–1988). Her early works were influenced by the neo-expressionism of “the New Wild” and postmodernism; during the late normalisation period, she presented them at unofficial Konfrontace/ Confrontations exhibitions. Since the 1990s, she has devoted herself exclusively to sculpture (from small objects to monumental figurative sculptures), using a material that was essentially unused in art – polystyrene. At the same time, she began to use other, generally non-sculptural and often kitsch materials (fur, fish scales, feathers, cellophane, costume jewellery rhinestones), which imprint a subversive pop(art) ironic undertone on her work. Bornová has long thematised interpersonal relationships, female identity, and the fetishisation of the female body in her work, as well as the loneliness of the individual in the midst of modern society. She is represented in the collections of the National Gallery in Prague, the Aleš South Bohemian Gall ry, the Klatovy – Klenová Gallery, the Museum of Arts and Design in Benešov, and in a number of private collections in the Czech Republic and abroad, including Collett Prague – Munich a.s. and the Wanniek Gallery. A retrospective Czech-English monograph, Fragile Monuments, which summarises the development of Erika Bornová‘s work and her exhibition activities, was published by the KANT publishing house in 2016. The same publisher is bringing out a bilingual publication, Madness is the Guardian of the Night, for the exhibition of the same name at the Colloredo-Mansfeld Palace, with texts by Martina Pachmanová and Otto M. Urban.

Erika Bornová: Madness is the Guardian of the Night 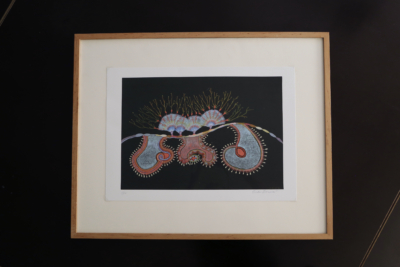