The first and only exhibition of the Devětsil Art Association in Prague City Gallery took place in 1986, more than 30 years ago. František Šmejkal prepared it in collaboration with Rostislav Švácha and Jan Rous. Subsequently there was a number of partial or monographic exhibitions of the Czech visual avant-garde of the 1920s, e.g., Devětsil in Brno or Josef Šíma’s early work, but it has never before been presented as a whole with new research findings.

The upcoming exhibition, accompanied by a catalogue, wants to be not just a synthesis of previous efforts, but also to offer another point of view on this work. It focuses in particular on what was essential to Devětsil’s concept of art and its activities: a departure from the traditional concept of autonomous art, in which a key role was played by the Bazaar of Modern Art of 1923, an attempt (at least in projects) at intermedia productions, etc. The role of architecture, photography, film, theater and entertainment will be emphasized. The project will try to evoke the atmosphere of Karel Teige’s “ars una”. The second main objective will be to show the association’s actual contacts with the European avant-garde through their mutual visits, lectures, exhibitions and the magazines that became an important international medium for the exchange of information. As the concept of the exhibition suggests, the intention is to employ intermedia to better present Devětsil’s elements of style: architectural and scenographic models, film projections, sound recordings, digitization of the magazines and photographic reproductions are envisaged. “Classical” visual art and its presentation in a museum setting, will not, therefore, be put in the forefront, but live performance of the visual will be prioritized as Devětsil itself preferred (the exhibition will focus on selected key works, especially on mixed media techniques of collage, photomontage, etc.). This will be presented in the catalogue in a corresponding way, featuring not just synthesizing studies of architecture (Jakub Potůček) and magazines, typography and the genesis of Devětsil (Jindřich Toman), theater and scenography (Jitka Ciampi Matulová), film (Lucie Česálková), photography (Karel Císař) and freeform art (Alena Pomajzlová), but also color reproductions with comparisons, selected contemporary critical reviews, artists’ and authors’ quotes, and graphically differentiated additional information. Last but not least, the exhibition and the catalogue commemorate František Šmejkal, who died exactly thirty years ago.

in cooperation with the Museum of Decorative Arts in Prague 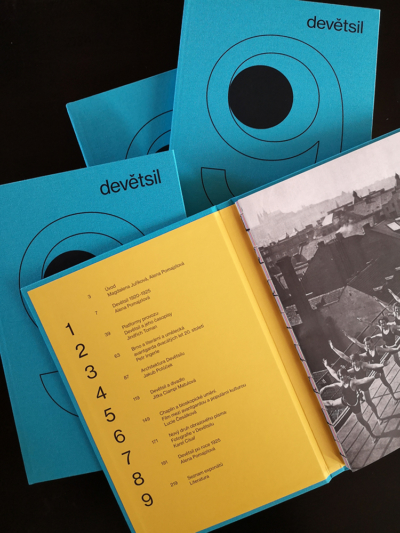