Staircase of the Troja Château

The spectacular staircase with the in the southern part of the ChâteauTroja led noble visitors, who came from Prague through the hunting park (current Stromovka) to the château gardens, directly to the ceremonial hall on the first floor. The staircase was also built as a standalone Baroque theater – a stage for the scene depicting the fall of the Giants to Tartarus. The architecture of the staircase contained the elaborate hidden water system that let the water fall onto defeated Giants, adding a lot of drama to the scene. The first stage of the construction of the staircase and the sculptures took place in 1684–1685. The realization of the project was confided to Johann Georg Heermann and his nephews, Zacharias and Paul Heermann. The youngest part of the staircase includes the busts on the outer banister of the staircase, probably made around 1708. Apart from the signatures of two sculptors who worked on the staircase, its stones also bear the author’s mark of architect Jean-Baptiste Mathey, on the bottom of the drip ledge under the main landing.

Iconographical program of the staircase

The main idea of the victory of good over evil was depicted by Count Wenceslas Adalbert of Sternberg right in the sculpture above the stone portal to the main hall. The dominant figure of Nike, the allegory of Victory, is sitting on her throne overlooking the collected military trophies with armor, guidons, cannons and other weapons. By her left side, a lamb and a lion lie together as a symbol of peace that’s coming after the triumph in a war.

Down under, though, a fierce battle is raging between Olympian gods and rebel Giants. The Giants were sons of goddess Gaia, gifted with enormous strength, invulnerable. Their brothers, Titans, several generations younger sons of the earthly goddess, also fought Zeus (or Jupiter in the Roman tradition) and other gods, and were imprisoned in Tartarus. Gaia was unhappy about the defeat of the Titans, and encouraged the Giants to rebel against Olympian gods, which the Giants obediently did. Jupiter called on Hercules, and together, with the help of other gods, they defeated the Giants too. The staircase of Château Troja depicts the overthrow of the Giants to the Tartarus abyss in full detail. However, the iconological program is in some ways interconnected with the Titanomachy. The depictions of both wars, Gigantomachy and Titanomachy, have mingled and often merged since the 2nd century AD. Often a single scene displays iconographical details pertaining to both mythological wars. During the wars against Turks in the end of the 17th and beginning of the 18th century, this theme was very popular as a parallel to the fight against the dangerous invasion from the East.

On the right side just above the Tartarus, Jupiter (Zeus) is throwing a bundle of lightnings downwards. On his side he’s got the second most important Olympian figure, goddess Minerva (Pallas Athena). On oval banisters around the staircase, other Olympians fight the Giants; on the left side, there’s Apollo, Mercury (Hermes), Prometheus and Vulcan (Hephaestus), on the right Mars (Ares), Neptune (Poseidon), Pluto (Hades) and Hercules (Heracles). The first lower pillars of both flights of the staircase bear the reclining figures of goddesses Diana (Artemis) and Ceres (Demeter); standing next to them are Chronos (Saturn) and Jupiter’s son Bacchus (Dionysus) on the right.

The inner side of the staircase is made by roughly hewn rocks; in the fissures there are various beasts that inhabit the abyss, such as lizards, snakes, or frogs. And the closer look to the fissures and alcoves reveals faces of the Giants thrown to the Tartarus for good, turning to stone. In the depth of the Tartarus, a couple of Giants is squirming in pain and helplessness, as they can’t roll away the stones thrown upon them by the Olympians. Two other Giants are trying hard to get rid of the fallen rocks under the main landing.

On the top of the outer staircase wing, there are busts symbolizing the order and structure given to the world by the Olympians, and restored after their victory over the Giants. There are four busts of the continents, four busts of the elements, and four busts of daily times, i.e. allegories referring to the space, matter and time. 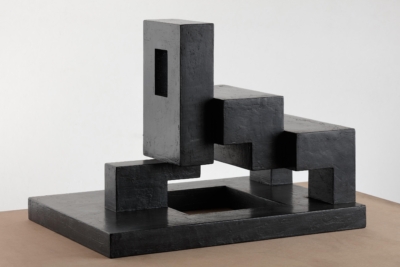