The open-air grounds and interiors of Troja Château will host an exhibition of work by a major artist whose output in many ways outreaches the boundaries of glass making to touch upon diverse environmental and architectural issues. He has been a pathfinding force in the endeavours to assert the relevance of optical glass in art wherein he introduced it from its original domain of science and technology. His method of work with it has enabled him to create objects which absorb and further dynamize the reality of the surrounding world. A ubiquitous feature of many of his works, the compound light-kinetic element, is conveyed by various media and materials, including glass, polished metal, or water surface – or indeed, their multiple combinations.

Václav Cigler (b. 1929) founded a specialized studio, Glass in Architecture, at the Bratislava Academy of Fine Arts and Design, in 1965, of which he was for many years the head. This seminal orientation characterizes the focal point of his creative pursuit. Apart from that, he has likewise been involved in work on smaller-scale forms, including lighting and jewellery. His Troja Château show lays emphasis on interaction between his works and the Baroque setting of the chateau and its gardens. It brings into new contexts both earlier works and new ones realized specifically for this occasion.

The exhibition commemorates 32 years of cooperation between Václav Cigler and Jan Frydrych and the 50th anniversary of the establishment of the Glass in Architecture Studio at the Academy of Fine Arts and Design in Bratislava (1965–1979). 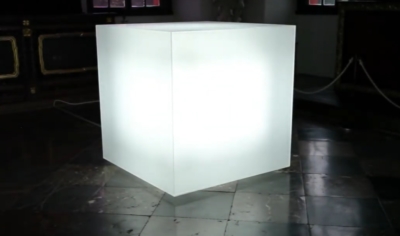