under the auspices of the Mayor of the Capital City of Prague, Adriana Krnáčová

The architect, sculptor and painter, Santiago Calatrava, who enjoys respect on an international scale, is active in the Swiss city of Zürich. He will introduce himself in Prague by both his free art and his architectural models, making viewers familiar with his most significant realizations scattered throughout the globe. One of his enigmatic works is the New York World Trade Center terminal in the form of massive looming wings, completed in 2016. Calatrava’s first work for the United States was the extension to the Milwaukee Art Museum by Eero Saarinen, where he employed a similar principle as in New York, only the wings in the latter case represent a moving element. He is, however, also the author of a wide array of outstanding bridge constructions (more than 50 dating to the 1980s and 1990s), for instance that on Canale Grande in Venice and the Bridge of Strings in Jerusalem. One of his most extensive realizations is the City of Art and Science in his native Valencia (1991–2005).

His works for architecture are based on everyday drawing studies of human body, on the morphology of engineering constructions and, last but not least, on geometrically formulated sculptural work. Calatrava was awarded the Auguste Peret Prize for architecture by the International Union of Architects (1987), golden medal by the American Institute of Architects (2005), and the 2005 European Prize for Architecture. Among other places, he exhibited in the Museum of Modern Art and the Metropolitan Museum in New York.

Santiago Calatrava: Q & A / discussion in CAMP (Center for Architecture and Urban Planning) 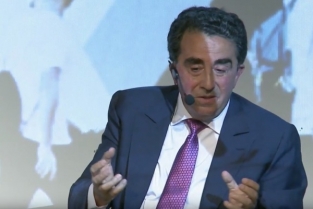