Surprising similarities, parallels and paradoxes of epoch-making events in Portugal and Czechoslovakia. Borders of a democratic continent, as well as borders of an epoch – Carnation and Velvet Revolutions as the first and last of the “third wave” of world revolutions and their reflection in visual arts.

The curatorial project Carnations and Velvet / Art and Revolution in Portugal and Czechoslovakia for the first time presents Portuguese art in the Czech lands and Slovakia. The common starting point is the year 1968, the time of the Prague Spring in Czechoslovakia and the spring of Marcelo Caetano in Lisbon. This year brought about first hopes for the end of the existing undemocratic regimes – the hopes that were thwarted by the Soviet occupation in Czechoslovakia and by the continuation of the colonial war in Portugal. The years 1974 and 1989, the dates of peaceful revolutions, brought freedom to both countries. The Carnation Revolution took place on 25 April 1974, and the Velvet Revolution in Czechoslovakia on 17 November 1989.

The project features works of Czechoslovak artists, the legendary personalities who were of crucial importance for the formation of contemporary art in their diverse responses to the totalitarian regime, namely Adriena Šimotová, Eva Kmentová, Květa Válová, Jitka Válová, Jiří Kovanda, Petr Štembera, Karel Miler, Jan Mlčoch, Milan Knížák, Václav Havel, Jiří Kolář, Július Koller, Ľubomír Ďurček, Mária Bartuszová, Jana Želibská and many others. They will be juxtaposed with their Portuguese contemporaries such as Helena Almeida, Lourdes Castro, Ana Vieira, Ana Hatherly, Fernando Calhau, Manuel Alvess, António Barros, Silvestre Pestana, Alberto Carneiro, Ernesto de Sousa, Álvaro Lapa a José de Guimarães. Space will also be given to the younger generation of artists who reflect the theme of both totalitarian regimes, such as Zbyněk Baladrán, Carla Filipe and Ana de Almeida. In addition to works of art, the exhibition will feature extensive research by České televize, Rádio e Televisão de Portugal, Václav Havel Library, Fundacão Soares and the private archives of Portuguese students who, as the first foreign delegation, came to support the democratization of Czechoslovakia. As a token of support and sympathy, they handed out 50,000 roses to the people assembled at the rally on Národní Street, and, together with President Mário Soares, donated a car to Václav Havel.

The large-scale research project will be accompanied by a trilingual publication with articles by Sandra Baborovská, Adelaide Ginga, Pavel Szobi, Vít Havránek and Ana de Almeida. The publication and exhibition have been created in association with Prague City Gallery and the Museu Nacional Contemporânea do Chiado.

under the auspices Mrs. Manuela Franco, The Ambassador of Portugal in Prague and Mrs Hana Třeštíková, Prague City Councilor 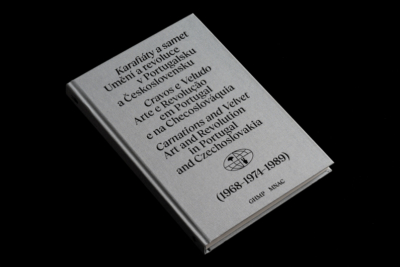